After several weeks of heavy rain and hot and humid temps, we finally managed to go out for hike on the holiday weekend. We decided to tackle Carter Dome which would count for number 38 on the list for us!

With temps in the mid 90s we took it slow up this peak. We were very surprised to see how relatively uncrowded it was considering the July 4th holiday. Nineteen Mile Brook Trail is a well used trail that links Carter Hut, a popular destination for backpackers, to route 16 and Pinkham Notch. Bugs were pretty bad on the lower elevation of this trail, which we expected given the time of year and amount of rain we have seen lately.

We hit Zeta Pass fairly quickly and bumped into an old hiking friend. After catching up we continued on to Mount Hight, which adds less than a half mile to the overall hike. Hight was a spectacular addition to this hike! Wonderful views and cooling winds! We were slogging it in the humidity and almost considered skipping this peak, but we were glad we didn't.

View from Hight of Presidential Range

Have you ever noticed how deceiving distances are from the tops of mountains. Typically I get to the top of a neighboring peak and scope out the other peaks on our trip only to muster a "we have to still go all the way up there?" Hight was like that for me. We got to the top, enjoyed the views, then had to rally some strength to go what looked like a lot further. Turns out it was less than thirty minutes or so to hit Carter Dome. Very minimal views at the top, but side trails provided some outlooks.

We included a quick visit to Carter Hut to refill waters and cool off in the pond, which was so refreshing! Definiately a great spot to jump in- if your time allows!

Posted by Betty Mountain Girl at 5:15 AM No comments:

The wonderful thing about tackling the list of 4,000 footers- is that it has gotten us completely hooked on hiking. To start our year off- we were just as eager to rehike some of our favorites and to try other trail approaches. The Osceola's were a good bet because they weren't as far of a drive as some hikes still left on our list (like Cabot). Plus, when we hiked the Osceola's last year the peaks were shrouded in thick fog and rain, so actually getting to see the view was a pretty good motivator.

Turns out that we missed out last year hardcore- the views are amazing!! The peaks are relatively easy ones for distances and elevation gain and you're rewarded with spectacular views.

Over the winter we hiked some, snowshoed a little, but didn't nearly keep up with the distances we hit last summer. So this year was a hard start for us. Our brains were ready for big hikes like Owl's Head, but our bodies were thinking we should stick to things like the Kinsmans. It doesn't help that the weather this year has been long stretches of brutal. When it's not hot and humid in the 90s, its hot and humid with thunderstorms in the 90s.

So Osceola was a great hike to redo. Our legs needed the work and our brains needed the views. Also I wanted to show pictures of the Chimney- a rocky stretch between Osceola and East Osceola that can be extremely difficult in the winter given the level of snow cover. It's completely manageable when dry in the summer.

Posted by Betty Mountain Girl at 4:43 AM No comments:

After years of hiking in the Asolo Women's Stynger hiking boot, I finally made the jump to a new boot- AHNU Montara boot. The Montara has been pretty well received and reviewed and after last year's incredible blisters upon blisters upon blisters, I knew I needed to make a change if I wanted to do longer hikes.

Now last year I just powered through the blisters. They were a regular thing. Weirdly after several hundred miles of hiking they became blood blisters (ew!). I received plenty of advice. I tried the foot guru's at EMS. I tried several foot gurus and I bought the Stynger in a smaller size (suggestion of the sales associate- didn't work and hurt more- ouch!). I had shoe sales people suggesting that I just try to form calluses, which I discovered from 20 weeks of hiking last year with giant blisters and then blood blisters and then blisters on my blood blisters, that forming calluses may take years for me.

SO finally I tried a boot that worked for me. One thing I've discovered is that if you get blisters, you can try a few strategies (tying boots differently, trying different socks or layers of sock), but likely you are in the wrong boot for you. This is tricky because some people can hike in the certain boots with no problem, in fact Adam hiked for years in the men's version of my boots without a single blister. Interestingly, when he got new boots (Vasque's) he started getting blisters.

I would like to scream the following if I may... the women's Ahnu Montara boots freakin' rock!!! They are the perfect boot for me. While I definitely cannot guarantee they will be the right type of boot for other people, they are well worth a shot for those searching for the right boots. I don't get blisters in the Ahnu's!!!! I can't believe how easy it is to hike when you don't feel the scrape of skin against boot.

Things I still need to find out about...

Disclaimer: Product Reviews are based on opinion only and are not intended to condone, encourage, or promote a product. Some products are sent to me by the manufacturer or affiliates and are mine to keep. I mention this specifically on products sent to me. Compensation and/or product and/or services never interfere with the review of the product. Otherwise, products and services are purchased by me for personal use. The boots were purchased by me.
Posted by Betty Mountain Girl at 4:17 AM No comments:

Our hiking season started off with a snowy bang on Memorial Day for Mount Moosilauke, where we were greeted with fresh snowfall, snowdrifts of six inches, and massive mud puddles. Truthfully-- that's the kind of crap I like-- the sort of unexpected weather (while being prepared that is!).

The following weekend we decided to trek up two other familiar favorites-- Liberty and Flume. Last year Mount Liberty and Flume were numbers 10 and 11 on our 4,000 Footer list. At that time, we had elected to do an out and back hike, mainly because it was shorter (by around .5 miles- so minuscule) but also because I'm scared to death of heights these days.

So this time, in order to try challenge ourselves we elected to hike the Flume Slide Trail, which would give us a nice loop over the two peaks. Summer weekends can have these two popular mountains packed with vacationers and day hikers, so getting back up to see the amazing views before the crowds was an excellent idea.

Flume Slide Trail is a stellar, killer hike. I've read all sorts of different trail reports-- for some people it's not that steep or challenging and for others it's a haul. For us, we found it to be rugged and a challenge, but not what I like to call "a suffer fest." Many sections of the trail were extremely wet despite the relatively dry weather prior to our hike. I would only expect with the recent tsunami-like rain we've been getting in New Hampshire that the trail conditions continue to be wet and slick.

The Top of Mount Flume

The trail winds through a nice forested area, crisscrossing over a small stream several times. Our hike was accompanied by humid and hot weather, so it was nice to dip our faces and heads into the cool water. The trail later turns into a rocky scramble up sheer rock. It's manageable with footholds and handholds, but really tricky when wet.

We stopped near the top to down our sandwiches and bumped into a friendly hiker with his two dogs. I think the dogs handled the scrambles better than me! It's always great to see how even the smallest amongst us can handle tough terrain. This hiker and his dogs are roughly at around the same number for 4,000 footers after just starting last year and since we both saved many of the longer hikes for last-- we may be seeing more of each other!

Hikers on Top of Flume

Mount Flume with Waterville in the Distance

The views atop Liberty and Flume are absolutely amazing. I never get over the way the clouds cast shadows on top of the mountains and while I love the feeling of isolation in the middle of the wilderness, I'll take this busy, but scenic view any day...

To kick off our 2013 hiking, we decided to trek back up a familiar peak- Mount Moosilauke- in order to get ourselves back into shape for hiking our 4,000 Footer list.

(We had big plans to work on our Winter List this year, but let's face it- life gets in the way sometimes! For our plain 'ol 4,000 Footer list we have a lot of the big peaks and treks left- the Bonds, Isolation, etc., so we may be hiking peaks we've already hiked in order to prep.)

Memorial Day weekend gave us four days in a row to hike and we were so pumped! Until we saw the weather reports that is... Turns out Memorial Day weekend was basically a wash up here in New Hampshire. We had serious rain paired with winds and unseasonable cold temps. So we had only one day to really get a hike in and that was on Memorial Day itself.

The conditions were manageable, but extremely poor. You basically saw all your typical spring thaw conditions-- mud, mud and more mud. And did I mention snow? That too.

The lower end of the trail was extremely wet and muddy, making the trail slippery and slow going. As we climbed higher the trail became snowy and muddy and the trees began to melt away the snow stuck to their branches so it was almost raining on us.

Above treeline the snow was much deeper- maybe drifts of close to a foot. It would have been helpful with traction, but it wasn't necessary. Wind speeds were amazing on our hike! At the top sustained speeds had us hunched over and gusts knocked us around.

(I know- we are totally a Marmot commercial!)

The good news is as we hiked down the snow appeared to be melting quickly! So there may not be as much snow on Moosilauke for those who head out next weekend.

Posted by Betty Mountain Girl at 4:30 AM No comments:

Hi! I am Betty Mountain Girl. I'm outside everyday mountain biking, hiking, trail running, kayaking, fishing, or just plain ol' having adventures in the outdoors. I don't claim to be an outdoor expert. In fact, it is through my un-expertness that I have the most laugh-out-loud, side-stitching, dirt-diving, incredible outdoor moments. Join me in the fun. Get out! 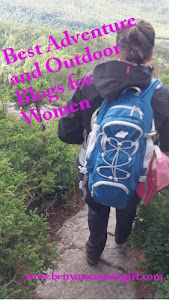 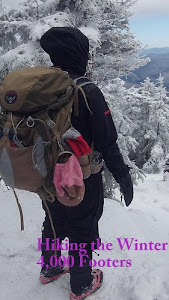 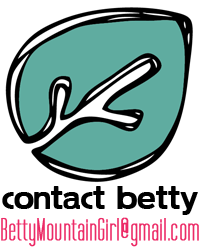 Disclaimer
Content on this blog is entirely the blogger's own opinion. Information on this blog should always be personally researched and verified by the reader.